By John Dewhirst Ask a rugby enthusiast to name the traditional giants of English rugby and the chances are that Bradford would not come to mind. Yet immediately prior to the 1895 split, the Park Avenue club was considered alongside Newport and Blackheath as one of the leading sides in the British Isles. The Bradford fixture list - comprising contests with the likes of Oxford and Cambridge Universities, Marlborough, Blackheath, Richmond and Newport - was testament to the status of the club. Similarly, many people may be surprised to know that Bradford was where the Barbarians were formed in April, 1890. Again, the birthplace reflected the fact that Bradford was a prestige venue for a touring side. During the ten years prior to 1895 Bradford FC consistently provided at least two members in the England XV and of all the northern clubs it was Bradford FC that contributed the most internationals during this period. [caption id="attachment_1923" align="alignleft" width="427"] 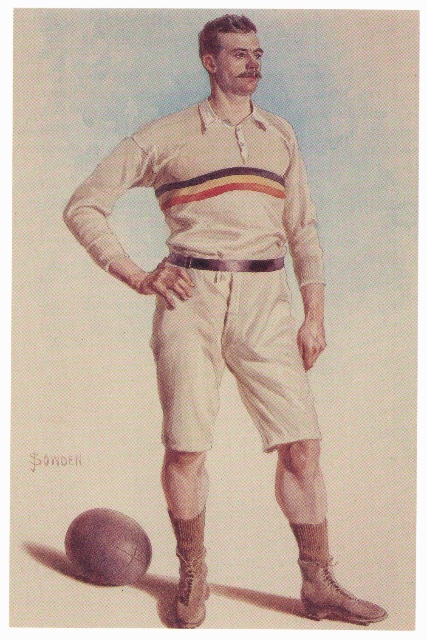 Fred Bonsor, Bradford FC[/caption] Bradford is more commonly known as a centre of Rugby League and indeed, the city has recently been selected as the home of the new National Rugby League Museum. Two of the founder members of the Northern Union were from Bradford and it was Manningham FC - later reincarnated as Bradford City AFC in 1903 - who finished champions of the inaugural NRU championship in 1895/96. By the end of the nineteenth century there was regret at Park Avenue about having seceded from the Rugby Union and in 1907 there was even a vote of the Bradford FC members for a return. That decision was later overturned in favour of introducing soccer and rugby enthusiasts opted between the Bradford Northern phoenix professional club and local amateur sides. Eventually a successor Rugby Union club, Bradford RFC was formed in 1919 and prior to the opening of Odsal Stadium in 1934 regularly attracted five figure crowds to its ground at Lidget Green. Eventually, in 1982 the club merged with Bingley RUFC to become Bradford & Bingley RUFC. Such was the controversy and polemic of the schism in 1895 that the Rugby Union heritage of both Bradford FC and Manningham FC came to be virtually forgotten. This was despite the fact that the two clubs played a major role in determining the history of rugby in this country. Theirs was the story of two competing businesses who struggled to co-exist. Fundamentally they were more alike than their followers cared to admit. Their differences were defined principally by urban geography as opposed to social class. Bradford FC, based at Park Avenue - a Victorian cathedral of sport - was the high church alternative to Manningham FC, its non-conformist rival at Valley Parade. Between them they represent case studies of how rugby became established as an entertainment industry in the Victorian era and of how a sport became commercialised. During the nineteenth century Bradford had been one of the fastest growing urban centres in Britain and it was essentially an industrial frontier town. Sport played a massive role in helping to shape the town's identity and civic patriotism. Both Bradford FC and Manningham FC had a big part in this and provide a unique study of how sporting culture evolved alongside urbanisation and the growth of a town. In this sense, rugby was as much a product of industrial revolution as an industry in itself. The two Bradford clubs bore witness to a sporting revolution and the transformation of a game based on the supply of enthusiasts to one based on the demand (or otherwise) of spectators. The Bradford club could trace its origins in 1863 although did not play a competitive game with another club until the winter of 1866/67. To that extent the city of Bradford can boast a sequence of 150 years of competitive rugby. However, it was not until around 1872 when things became fairly serious and fixtures were a matter of civic pride against other emergent clubs in Yorkshire. By the mid-1870s Bradford FC under the captaincy of Harry Garnett had established a reputation as one of the leading clubs in the county. Consistent with its new found status, Bradford FC actively promoted the formation of the Yorkshire Challenge Cup competition in 1876 which proved to be a catalyst for the formation of clubs elsewhere in Yorkshire. Bradford FC was also a prominent member of the Yorkshire County Football Club from 1874, the organisation which managed the affairs of rugby in Yorkshire, later reconstituted as the Yorkshire Rugby Union. As the oldest club in the county, Bradford FC saw itself as an aristocrat of the game and was boastful of its role acting to encourage its spread. It was a matter of accident that rugby - as opposed to soccer - came to be played in Bradford. The example of the town's senior club undoubtedly encouraged the choice of code and once established, the option of soccer was limited by virtue of the fact that there were insufficient playing areas to accommodate both games. In fact, such was the demand for rugby - known in West Yorkshire simply as 'football' - that soccer was initially crowded out. It was the opening of Park Avenue in 1880 as home to the newly formed Bradford Cricket, Athletic & Football Club that had a further impact on the growth of rugby through commercialising the game. The new ground and development of facilities made it possible for unprecedented crowds to attend. Park Avenue provided Bradford FC with economic advantage and within ten years the club was considered the wealthiest in England, even subject to tax investigation in 1893. By winning the Yorkshire Challenge Cup in 1884, Bradford FC made rugby fashionable in the district and it was this achievement that led to the formation of junior clubs in every surrounding village. [caption id="attachment_1924" align="alignright" width="270"] 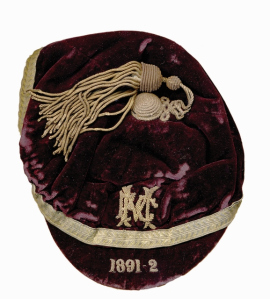 Cap belonging to George Lorimer, Manningham FC[/caption] Manningham FC had emerged in 1880, in circumstances indirectly related to the opening of Park Avenue and the changes that this created to the composition of other local sides. By 1885 Manningham FC had reached the final of the Yorkshire Cup and established itself as a rival of Bradford FC. That rivalry would become increasingly bitter, akin to a blood feud and this defined the future relationship of the two successor soccer clubs. There were numerous incidents that antagonised relations between the two but fundamentally the rivalry was that of business competitors. With relocation to Valley Parade in 1886, Manningham FC became established as a genuine economic threat to Bradford FC which resented the loss of its monopoly. It was not without substance that Manningham members perceived attempts by the Park Avenue organisation to extinguish their own club. Neither missed the opportunity to undermine its rival when the opportunity presented itself and collectively their conduct made a mockery of notions of Victorian sportsmanship. The story of Bradford rugby explains why the Northern Union came about and the economic pressures that forced the split in the game. It also offers a unique perspective on why West Yorkshire was a rugby heartland and the subsequent co-existence with soccer. Above all, the example of the two Bradford clubs who were variously members of the Rugby Union, Northern Union and then Football League illustrates the extent to which the history of the three codes has been intertwined with a common, shared heritage. About the Author - John Dewhirst's 'Room at the Top' covers the origins of sport in

Bradford through to 1890 whilst 'Life at the Top' tells the story of the first rugby league in Yorkshire and split of 1895 as well as the circumstances behind rugby being abandoned at Valley Parade and Park Avenue in the first decade of the twentieth century. For details on how to purchase visit