The following description of the 1912 match between Newport and South Africa is an extract from the 1948 book 'Rugby Recollections' by WJ Townsend Collins (aka 'Dromio'), who was a poet and correspondent from Newport.

When the South Africans came to Britain in 1912, under the captaincy of W. A. Millar, they brought with them a stuffed Springbok's Head, to be presented to the team who first defeated them. They had the trophy with them at Newport on October 24th: it went no farther, for they were unexpectedly beaten. 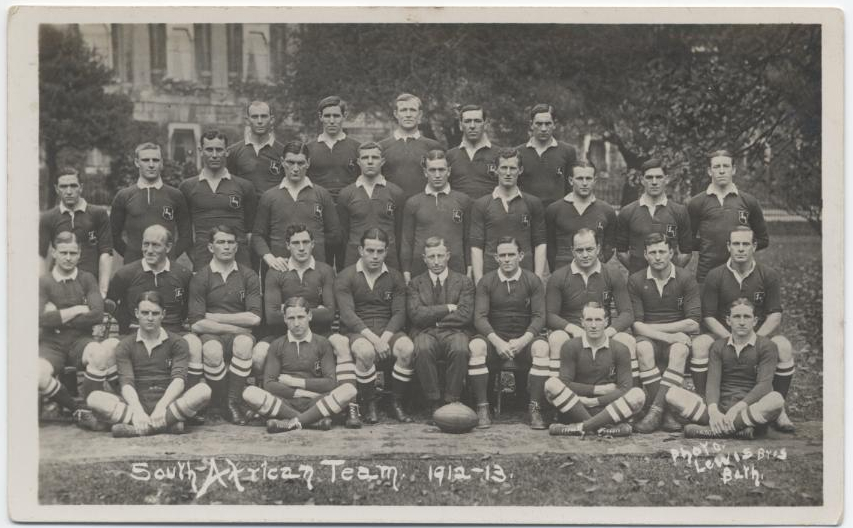 The South Africans were taller, heavier, stronger, faster; yet they could not win. Why? The result turned on superior tactics and superlative captaincy. Newport, with that brilliant strategist, T.H. Vile, at inside half, with that other captain, Bob Dibble, leader of the pack, went on the field with a definite policy. They knew they were slower behind and lighter in front, so they laid themselves out to turn to account their own powers and qualities, and to limit the opportunities of their opponents. They did their utmost to prevent the Springboks from gaining possession; and their consistent touch-finding gained ground and conserved the energies of the forwards, who thus were able to bring into play their special qualities-dribbling and following up. The game was exciting from the first moment. Several times the South Africans were only kept out by great tackling; on the other hand, Walter Martin, Newport's captain and outside half, burst through once in brilliant style, and a try seemed certain on the left wing; but Fred Birt knocked on. When the Springboks got to the Newport 25 with a rush, Birt and Herbert Wreford drove them back to their 25 with sound kicking. The forwards took a hand from a line-out, and Harry Wetter crossed the line, but was called back-"Forward pass!" However, this left play near the line; the ball was worked back smartly to Birt in front of the posts, and with a soaring kick he dropped a goal. So just before the interval the home side had a lead of four points. In the second half, Jack Wetter, playing at centre, passed inward when he was expected to pass outward, and the ball went to the ground. Dick Luyt, the hero of the South African team, playing at centre, picked up smartly, ran through and a couple of transfers left the ball with that big, fast forward

He was clear, and raced in behind the posts. Unaccountably, though the charge was disallowed, Dick Luyt failed to send the ball over the bar, and the one-point lead which should have been South Africa's was Newport's. The Springboks flung themselves into the game with fire which seemed certain to burn a way through Newport's defences. A reverse pass opened an attack on the right; and from Dick Luyt's pass J. Stegmann burst for the corner. He was clear of W. P. Green, but Wreford went for him, checked him, and forced him against the corner flag-a near thing for the winning try. Once more the Springboks sent the ball out swiftly-this time to the other wing, and the giant Van der Hoff launched his 14st. 7lbs of bone and muscle for the corner flag. He seemed certain to score, but again Newport's full-back made a tremendous effort, crashed into is man, and just saved a try. Time after time the Springboks attacked. Had Newport wavered,--had a man among them lacked resolution,--their defence would have been pierced. When he found that Newport were like a stone wall, Douglas Morkel tried to get over it-he put up an immensely high kick, and followed up. It looked as if he had done the trick-for Martin failed to catch. But he had prevented the high rebound on which Morkel counted, recovered himself, and saved the situation with a brilliant kick to touch. Newport's supporters breathed again. Was Springbok aggression to continue till the end? Was it to be rewarded? Were Newport to be penned down in the danger zone? No, Jack Wetter put in a brilliant burst, and when expected to pass, put in a twisting cross-punt which turned the ball towards goal. Van der Hoff raced for it, dived for it over the line, missed it, and Birt, who had followed up in great style, fell on the ball. He converted his own try, and Newport led by nine points to three. With five minutes to go, Newport gave nothing away. Twice the Springboks kicked over the line, and minors were conceded. When the ball went to Newport in reply to the drops-out, they kicked to touch. They continued till the end the policy with which they began-they took the safe and easy gains of touch-finding, they deprived the Springboks of opportunities to attack; and so they won a historic game and won the Springbok's Head.