06 August 2015
From Middle Park to Gallipoli

On Saturday 8 August, 1914, only four days after Australia had entered the war, East Melbourne played South Melbourne on the Middle Park ground in the final game of the season. While East's won that game 14-8 their opponents gained the premiership by virtue of the points accumulated earlier in the year. The Dewar Shield, the premiership trophy, which had only been donated back in 1909, was then presented to South Melbourne, as it still is today to the premiers of the Victorian Rugby Union's senior competition, though since 1932 only after the peculiarly Australian 'final four' series has decided the ultimate winner. 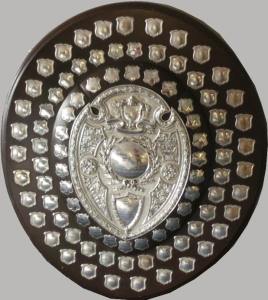 There could in any case have been no final four play-off in 1914 as only three of the half dozen Victorian Rugby clubs, Melbourne, East Melbourne and South Melbourne, remained in serious competition. The University and Training College clubs had been more concerned with preparations for their annual end-season games against their Sydney counterparts (which in the case of the inter-varsity game didn't eventuate that year), the Carlton club had only made a few appearances during the season and St Kilda, though a foundation club, had only competed for the Shield once, in the previous year. So in those few seasons before the war Melbourne had won the premiership three times, in 1909, 1912 and 1913, University and East Melbourne once each, in 1910 and 1911 respectively, and South Melbourne, finally, in 1914. A couple of days before the match a photograph of the East Melbourne team appeared in the Melbourne paper Table Talk ; unfortunately the players in the picture were not identified, although from various match reports we know the names of many. According to one, R.A Fetherston, previously of the Balmain (Sydney) Rugby Football Club, whose letter was quoted in the Referee of 7 June 1916, the majority were New Zealanders 'with a sprinkling of New South Welshmen and English players' , a combination which would be fairly typical of Victorian Rugby teams of that time. But what was notable about that team, even allowing for the patriotic fervour which in Australia and New Zealand then characterised support for the British cause, was that the entire team enlisted. As Fetherston wrote in his letter; 'Nothing much better than 100% will be done you must admit.' We are indebted to the Australian Rugby Union's ANZAC centenary tribute for the names of sixteen of them (which apparently included two sets of brothers) and to a note that fourteen had served at Gallipoli, where it is believed at least two died, as did others elsewhere later during the war. In Victoria, all senior competition Rugby ceased during the war and there was to be no East Melbourne team to take the field post war, in fact no serious Rugby competition was to resume in Victoria until, following a few seasons of Rugby League, the present Union was formed in 1926. While none of the teams to be affiliated with this new Union, including University, Melbourne, St. Kilda and East Melbourne, held any formal constitutional link with their pre-war namesakes they were nevertheless deeply indebted to them, as the 1914 clubs were in turn to those who had first introduced club Rugby to Victoria during the colonial era. About the Author - Ron Grainger is an independent researcher from Victoria, Australia. He has contributed several monographs to the World Rugby Museum archive, including 'Rugby Union in Victoria: The Early Years' and 'Rugby Union in Victoria: Between the Wars' both available on the website