The following is an extract from 'One Among Many: the Story of Sunderland Rugby Football Club' by Keith Gregson. "Of the many stirring rugby events at Ashbrooke, none aroused greater interest than the match played 26 September 1936" 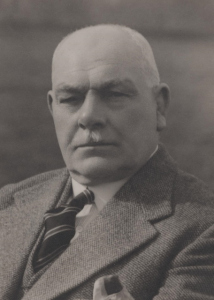 The game was between a Durham XV and an international XV and was played to mark the Diamond Jubilee of the County Union which had been established in the autumn in 1876. The international side was put together by legendary Hartlepool Rovers man, Bob Oakes. Oakes had been an England player and selector and was also a former president of the RFU. He had also played for the county on numerous occasions. The team chosen by Oakes for this special occasion was packed with talented players and a large photograph of both sides has adorned the Ashbrooke pavilion for many years. There were thirteen international players in his team - six from England, two from Ireland, two from Wales and one from Scotland. The remaining four were Yorkshire county players. George Beamish of the RAF and Ireland captained the side and fittingly, in light of the occasion, Hospital, Services, University and Club sides were all represented. There were a number of well-known players on view that day. The best known historically is Prince Obolensky, arguably the most famous rugby player of the time - certainly prior to the professional era. In 1936 he was turning out for Oxford University and England and had made his mark in January of that year by scoring a wonder try for England against the All Blacks in a rare victory over the visitors. His family had fled the Russian Revolution of 1917 and the Prince had just been made a British citizen. He was killed in a wartime flying accident at the age of 24. 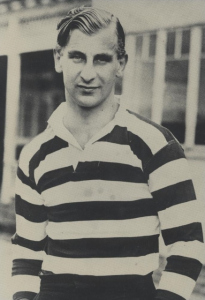 HG 'Tuppy' Owen-Smith, a South African cricketer as well as an England rugby player, had already left his mark on Ashbrooke while playing his other sport. In 1929 as part of the touring South African side, he had scored a century and taken four wickets in five balls in a game against Durham County - including a hat trick. He played at full back for the international XV in the Jubilee Match. At the tender age of 19, Haydn Tanner, the Welsh scrum half, was already the talk of the rugby world. During the previous year and while still at school, he had been instrumental in helping Swansea to victory over the All Blacks. His career continued after the Second World War and Tanner, who died in 2009, is regarded in some quarters as the finest scrum half ever. The Durham side was a fairly strong one too. It contained two international players - Cliff Harrison of Hartlepool Rovers and England (and at one time England's oldest living player) and Alec McLaren of Durham City and Scotland. The other Durham sides represented were Darlington Railway Athletic, Westoe, Gatheshead Fell, North Durham and Blaydon. Sunderland's single representative, as was often the case in the 1930s, was Alan Spence. On a pleasant autumn day, the crowd of 6,000 was treated to a fine display of running rugby. The final score was 19-3 to the international side with its players crossing the opposition line on five occasions. Obolensky scored twice. The post-game celebrations were equally sumptuous with all the great and good of the game in attendance as well as numerous ex-Durham players. Perhaps the most interesting was W Hodgson of the defunct Tudhoe club. He had been the first miner to represent the county - in 1866.