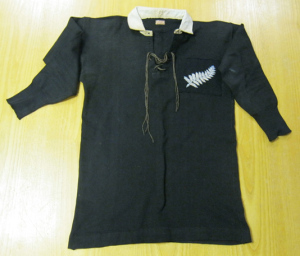 This 1908 New Zealand Jersey came to the museum by way of Tom Smith, an Anglo-Welsh and Leicester Tigers player from the 1900s. The Museum recently bought his collection at auction and it gives a unique insight into one of rugby union's early tours and the state of amateurism within the game at that time.

The 1908 Anglo-Welsh tour set off for New Zealand and Australia with the intention of promoting the union game to combat the rise of the professional league code. Ironically Scotland and Ireland had refused to send players abroad, reportedly because they believed such tours encouraged professionalism. Tom Smith was one of three Leicester players selected to tour. As a forward he played in all 9 matches in Australia and in 12 of the 17 matches in New Zealand, including 2 of the three tests. These were his last international games. On his return to England, Smith along with 2 other Leicester players, were excluded from the union for continuing to play for the club after either receiving money from Northern Union clubs or signing professional forms. 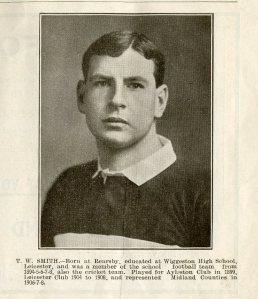 He later went on to play professionally for Broughton Rangers RLFC. This Jersey was worn by Flanker Charles Edward 'Bronco' Seeling whilst playing against the Anglo-Welsh side in New Zealand. Seeling played in all three tests against the tourists with the All Blacks winning 2 and drawing the third. It is likely he swapped this jersey with Smith after they played together in the final test of the tour. Notably Seeling was a member of the 'Originals', the first ever representative New Zealand side to tour Britain in 1905. During the tour the Originals were the first side to be nicknamed the 'All Blacks'.