Founded on 21st April, 1866 at a meeting held at the Glasgow Academy in Elmbank Street, the Academical Club played its first recorded football match, against West of Scotland FC, in January 1868 at Hamilton Crescent. 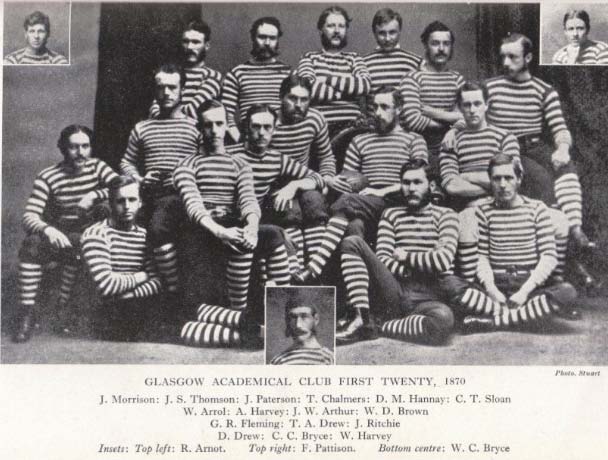 In 1870 Glasgow Accies became the first football team to cross the border and play in England against Liverpool and Manchester. Later that year the first club captain, J W Arthur, signed a letter challenging the Clubs of England to play a team from Scotland, this setting in motion a chain of events that led to the birth of International rugby. Accies contributed six members to the first Scottish team in 1871 and Academical Willie Cross (also a Merchistonian) converted the first goal ever recorded in International rugby football. In 1872 the Club hosted the first Inter City match between Glasgow and Edinburgh at Burnbank, beside Kelvinbridge, and two Accies, Tom Chalmers and Willie Cross were invited by Queens Park to take part in the trial for the first soccer international. The following year the Club hosted a meeting in the Glasgow Academy that gave birth to the Scottish Football Union later renamed the Scottish Rugby Union. Eight clubs were represented, Glasgow Academicals, Edinburgh Academicals FC, West of Scotland FC, the University of St Andrews RFC, Royal High School FP's, Merchistonians, Edinburgh University RFC, and Glasgow University. In 1883 the Club moved to Old Anniesland, and became founder members of the Scottish Amateur Athletic Association, and in1884 the Scottish Football Union was represented by Academical, JS Carrick, at a meeting to set up the International Rugby Football Board now named World Rugby. The Accies team of 1914 volunteered, to a man, for service. Of the fifteen players who played the final match that season, in March 1914 against West, eight were killed in action on 28th June, 1915 at Gallipoli, and six were seriously wounded. They had all played together, signed on together, fought and died together. In the 1920's four Academical players became particularly famous making their mark, not only for Accies, but for Scotland too. JC Dykes, JB Nelson, H Waddell and WM Simmers, and that quartet between them gained 88 Scottish caps. In those days there were often gates of up to 10,000 spectators when Accies were regularly Scottish Champions.

After the Second World War, Accies were reduced to only five or six teams. James H Smith served for 32 years as secretary, taking the Club into the 1960s when Brian Simmers and Mike Smith gained International honours and later when John Ross Beattie's outstanding International career started in 1980. Glasgow Hawks were formed in June 1997 with Academical Brian Simmers very much at the helm. Glenn Metcalfe, first of Accies then Hawks, went on to start his International career in1998, followed by the young Johnnie Beattie in 2006. In 1997 Accies were hugely fortunate to have had many committed members who 'dug in', when the Club's 1st XV was relegated to the bottom West District league as a result of giving up their place to Glasgow Hawks, and in the six subsequent years Accies won a record six consecutive promotions to get the Club back to the West Div 1 where it sits today.