Article first published on History Today, 12 April 2016. 'I shall never play at Twickenham again', twenty-five year old Lt Ronald Poulton-Palmer reportedly sighed as he lay dying at Ypres on 5 May 1915. Hit by a sniper's bullet less than five weeks after he had been posted to the Western Front, Poulton-Palmer had served his country twice over, once in the trenches, and once as Captain of the English national rugby team. He was one of twenty-seven England international players killed during the First World War. Many more have died serving in later conflicts. 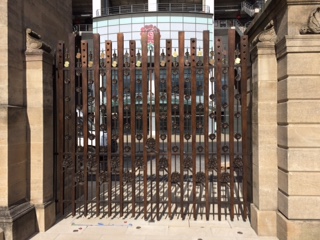 On 29 April 2016, the Rugby Football Union unveiled their stunning new Rose and Poppy Gates at Twickenham stadium, the official Home of England Rugby. Showing the symbolic metamorphosis of the English rose, as worn on the shirts of the national squad, into the remembrance poppy, the gates commemorate the sacrifice of all rugby players who have served and died in conflicts around the world. The annual Army v Navy Rugby Match took place the following day, drawing a crowd of 82,000, including many serving soldiers, veterans and their families. The RFU's proud association with the military is already recorded in an exhibition at the World Rugby Museum at Twickenham, which details the stories of those players who went on to serve their country in the forces. Here the 1914 England rugby union team are captured in a photograph, stripy socks pulled up, hair combed down, starched white shirts embroidered with the English rose. This unbeatable side was led by Poulton-Palmer, who scored four tries in the last test match before the war, a 39-13 victory over France. Famous for his glamorous style of play and 'elusiveness' on the pitch, Poulton-Palmer was hailed as one of the greatest players in the world. A third of his squad would fall alongside him during the coming conflict. 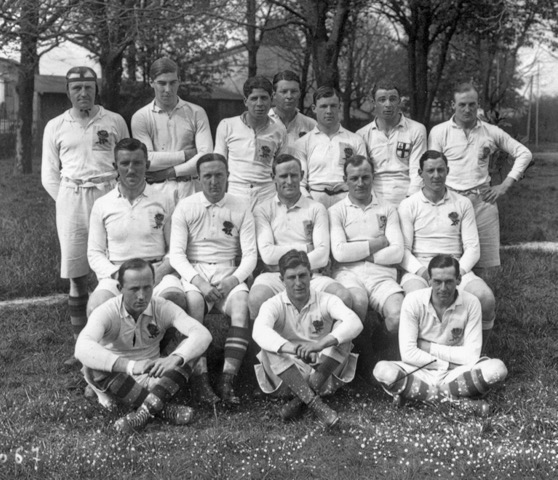 Lt Francis Oakeley, a scrum-half who won four caps for England, was killed in 1914 when his submarine, the HMS D2, disappeared in the North Sea. He was not quite twenty-four. A few months later surgeon James 'Bungy' Watson, who played centre, was one of 500 killed when the Royal Naval warship, HMS Hawke, was torpedoed by a German submarine. Capt. Arthur James Dingle, nick-named 'Mud' after the pitches of Country Durham where he learnt to play centre and wing, was exempt from military service as a serving school-master but petitioned to enlist. He died defending a trench during the Battle of Scimitar Hill at Gallipoli in August 1915. His body was never recovered. Debutant forward Robert Pillman volunteered for special duties in the Queens Own in northern France, once carrying a fellow officer who had been gassed 300 yards across no-mans land to safety. In July 1916 he was fatally wounded returning from a night-raid in Armentieres. A survivor of action in Gallipoli, Lt Alfred Maynard, hooker, was killed on the first day of the Battle of Ancre, Britain's last push in the Somme, in November 1916. At 22, he was the youngest England international player to die in the war. Finally from that 1914 squad, Lt-Cdr Arthur Leyland Harrison was the only England rugby international to have been awarded the VC. Despite suffering severe head wounds, on regaining consciousness Harrison lost his life while leading an attack to disable German machineguns at Zeebrugge harbour in April 1918. 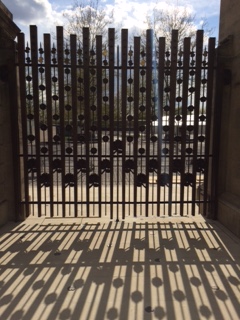 These men and their many colleagues are remembered in various military and sporting memorials in the UK and overseas, as well as with local plaques, benches and parish windows. Arthur Dingle has the distinction of being remembered twice in poems, once by PG Wodehouse in his mischievous English sporting send-up The Great Day, and with more reverence in John Sills The Ballad of Suvla Bay. Twickenham's new Rose and Poppy Gates will not cite any individuals by name, they are not intended as a military memorial in that sense, but rather as commemorative sculpture that will gradually come to hold several layers of meaning and association for the players and fans that pass through them. When artist and sculptor Harry Gray was originally approached for the commission, one idea was to create a large sculpture of an idealized young rugby player symbolically passing his ball to a First World War soldier. Gray specialises in permanent public artworks where the relationship of the work to the site is paramount. Past pieces include the Battle of Britain memorial on the south coast, which shows a young pilot, face turned to the skies, as he waits for the call to action. Seen from above, from a pilot's perspective, the figure is sitting at the centre of a propeller hewn from the white chalk of the ground, calling to mind how the courage, skill and sacrifice of the pilots has left a permanent mark on our country. For Twickenham, Gray felt the overt memorial feel of the figurative rugby player and soldier might not sit well with a match-day crowd's mood of exhilaration, or might be open to misinterpretation as a triumphant celebration of patriotic service on the fields of both sport and war. Instead he proposed the Rose and Poppy Gates as a less confrontational, more contemplative way to consider the Rugby Football Union's wartime sacrifices. 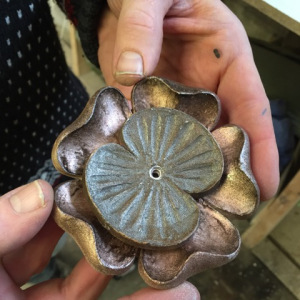 Gray feels that the RFU was brave in supporting this more modern concept, but his initial designs left him dissatisfied. An early maquette looked too floral and sentimental to carry the full meaning of the loss that the gates commemorate. Having rejected the use of thorns or barbed wire in the design, Gray reconsidered the materials involved. The English roses are now produced from 'gunmetal' bronze, imported from Germany as Britain no longer produces it, a marker itself of how international relations have changed. Most of the poppies are fashioned from the bases of First World War German shell casements, once fired at British troops during the war, and still bearing their factory date-marks. The firing pin holes serve as the poppy centres. Each one weighs heavily in the hand. Others are simply the iconic poppy shape cut out from the metal pickets, a striking presence in their very absence. In this way German shells are turned into symbols of remembrance, their function subverted while their history is preserved. The very material of the stadium gates encapsulates messages of patriotism, conflict, loss and commemoration. The gates' poppy theme inevitably draws comparisons wit Blood Swept Lands and Seas of Red, the installation of 888,246 ceramic poppies, each representing one British military casualty during the First World War, which flooded the Tower of London moat, marking the centenary of the outbreak of that conflict last year. For many, this was a powerful statement about the size of Britain's sacrifice, for others, a mawkish display of nationalism. The wonderful Ring of Remembrance Notre Dame de Lorette, an elliptical structure engraved with the names of the dead of all nationalities who fought in northern France, has proved equally controversial, but in this case for recognising the losses among belligerent nations alongside those of the Allies. 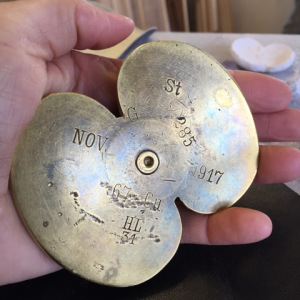 Perhaps some controversy is unavoidable. Gray believes that as war is a political act, 'any artwork which commemorates warfare is by definition political'. For him, such installations exist essentially to provide 'a social marker in time that uses sculpture or architecture as a holding place for memory', and he argues that the best commemorative sculpture 'asks questions, rather than just offering triumphalist solutions or expressions'. A recent inspiration that does just this was Turner Prize winner, and Oscar-winning director, Steve McQueen's For Queen and Country. Created in response to a visit to Iraq in 2003 as an official war artist for the Imperial War Museum, For Queen and County was McQueen's proposal for a set of postage stamps featuring the faces of servicemen and women who had lost their lives, with portraits chosen by their families. 'An official set of Royal Mail stamps struck me as an intimate but distinguished way of highlighting the sacrifice of individuals in the defence of our national ideals', McQueen contended. Collectively they would form 'an intimate expression of national loss that would involve the families of the dead and permeate the every day - every household and every office'. Although facsimiles of the sheets of stamps are kept in the Imperial War Museum, despite the support of the fallen soldiers' families and the Art Fund, Royal Mail has so far declined to issue the stamps. It seems that the loss presented in this way, without sentiment or compromise, appeared just too real, too great. Some of the England rugby union players who survived the Great War, as it was once known, later went on to serve again, alongside a younger generation in the Second World War. Cyril Lowe, who was credited with nine victories while serving with the RAF, would subsequently play rugby again for England. Twickenham's new Rose and Poppy Gates, though which both home and away teams will pass on match days, speak powerfully both of sporting and national history, and of individual loss. This is site-specific, war memorial art at its finest: beautiful, provocative, reflective, and a working part of the fabric of match life at Twickenham. Lt Ronald Poulton-Palmer and his team-mates would have been pleased; Twickenham has chosen to remember well. About the Author - Clare Mulley is the award-winning author of two biographies. The Spy Who Loved, about Christine Granville/Krystyna Skarbek, Britain's first female special agent of the Second World War, has recently been optioned by Universal Studios. The Woman Who Saved the Children, a biography of Eglantyne Jebb, founder of Save the Children, won the Daily Mail Biographers Club prize, and all royalties are donated to the charity. Clare's next book, a joint biography of two extraordinary women at the heart of the Third Reich, will be published in June 2017. Clare reviews for The Spectator and History Today, gives frequent public talks and her most recent contributions to TV and radio include BBC Radio 4's 'Great Lives' series, and Channel 5 TV's 'Adolf & Eva, Love & War'. In 2017 she will lead a lecture tour on the female agents of the Second World War in northern France. Clare lives in Essex with her family and lurcher. www.claremulley.com

He Saved Many Lives But Not His Own. Lest We Forget- Kit Tanner

On this day 80 years ago, Kit Tanner lost his life after rescuing 30 people from the wreckage of HMS Fiji. Here Malc King of the Gloucester Rugby Heritage archive pays tribute to a remarkable man.
Read More

“A most popular personality, a fine centre, and...the most effective kick, drop or punt the club [Bristol] so far had had.”
Read More

To commemorate the passing of a century since the outbreak of the First World War the RFU has commissioned a special painting of England's 1914 Grand Slam winning side.
Read More