Peter John Larter was born in Totnes Devon, on 7th September 1944. He joined the RAF as an apprentice at the No 1 Radio School at RAF Locking, was a member of the first ever RAF Colts team in 1963 and later became the first ex-RAF Colt to win senior international honours. 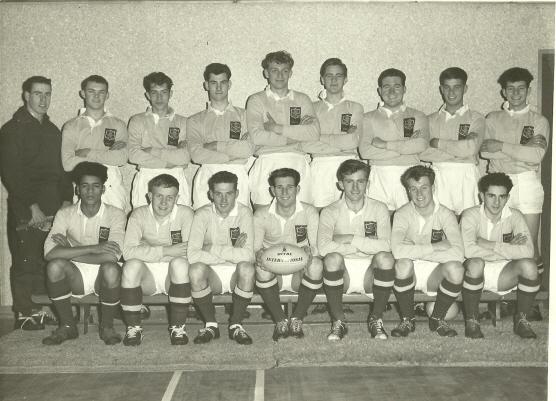 RAF Colts v North Midlands at RAF Gaydon in 1963. Peter Larter is in the middle of the back row. After just 3 games for the RAF he played in his first Inter-Service game on 10th April 1965 versus the Royal Navy who won 15-6. He eventually played in 20 Inter-Services matches and is the only person in history to have played in an Inter-Service game in 3 different decades. On Boxing Day 1966 he played for the Combined Services against Australia at Twickenham and there were four RAF players in the side that day; Flt Cdt P (Peter) B Glover was on the left wing, Fg Off W (Billy) J Bevan and Fg Off R (Roger) Hill were the half-backs and Peter was in the 2nd Row. Both Peters were to win their first caps for England against the tourists later in the tour. In 1969 he missed the Combined Services game against the Springboks which was played at Aldershot as he had been selected to play for his country against the tourists 4 days later. 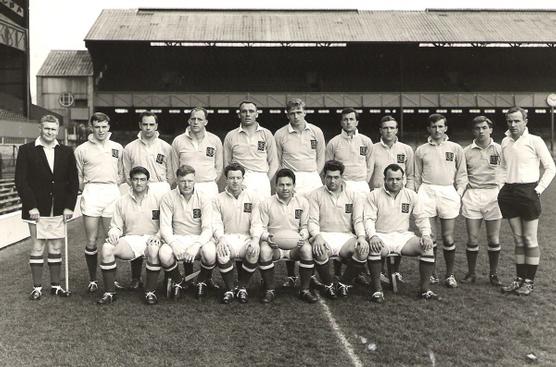 Inter-Service team, 1965. Peter Larter is 6th from left in back row.

He then played against Fiji at the United Services Ground, Burnaby Road, Portsmouth on 18th November 1970, a 11-6 defeat, but a game remembered for the moment when the crossbar was dislodged after being hit by the ball; it was once on 'Question of Sport' as a 'what happened next?' He also played for the Combined Services against the All Blacks in 1972 and remembers spending Christmas morning at home before meeting with the rest of the squad at BRNC Dartmouth, then making a very early start to drive to Twickenham in the days before motorways. After his first cap for England he went on to play another 23 times for his country and against all the then major rugby nations. In 1969 he scored a try at Twickenham against South Africa in his country's first ever victory over the Springboks. In 1972, having not been selected during England's worst ever home international season, he was a member of the team that defeated South Africa 18-9 at Ellis Park to complete an astonishing unbeaten 7 match tour. He played many times for the Barbarians, but had to decline an invitation to tour with the famous club on their trip to South Africa in 1969 as he had to sit his promotion exam!

Barbarians team before the final game of the 1967 New Zealand tour at Twickenham.

The All Blacks won 11-6. Peter Larter is 5th from the left in the back row. Larter was selected for the 1968 British & Irish Lions tour to South Africa where he became the 478th Lion. He played in the 2nd Test, held in Port Elizabeth on 22nd June, alongside Willie John McBride; the game was a 6-6 draw and the only Test in which the Lions were not defeated. He played his club rugby for Weston-Super-Mare, Northampton, Stafford and Harrogate; all clubs close to where he was stationed. During the 1977-78 season he played for Stafford and having turned up at the club looking for a game and without saying who he was, played for the 4th team! On a number of occasions the club would receive a phone call from Northampton asking if they would release him to play for them the next day. He continued to remain involved in rugby after he hung up his boots being the RAFRU Hon Treasurer for a couple of seasons and the RAFRU Representative to the RFU from 1992 until 1996; he also coached the RAFRU Senior XV. He has been a Midlands Division selector and President of Northampton RFC and is currently a citing officer for Premiership and European rugby. A truly modest man, he is still available when the RAFRU come calling and can be seen on the touchline during the home Inter-Service matches at RAF Halton. The RAF Rugby Union temporary exhibition is now open at the World Rugby Museum in Twickenham Stadium. For information on visiting, please see: www.worldrugbymuseum.com/visit

About the Author - Having spent his entire working career in the Royal Air Force, David Smith is now the RAF Rugby Union's historian and, at best, a mediocre but enthusiastic rugby player. Other entries in the series - Flying Lions: Rory Underwood, Flying Lions: Bleddyn Williams, Flying Lions: Ken Jones