Continuing our series of biographies by David Smith, covering some of the British & Irish Lions who served with the RAF. Bleddyn Llewellyn Williams was born in Taffs Wells on 22nd February 1923, the third of eight brothers. His first Welsh Schools cap came as a fly half in 1937 while at Rydal School in Colwyn Bay. In the last season before the war he played for Cardiff Athletic while working for The Steel Company of Wales. 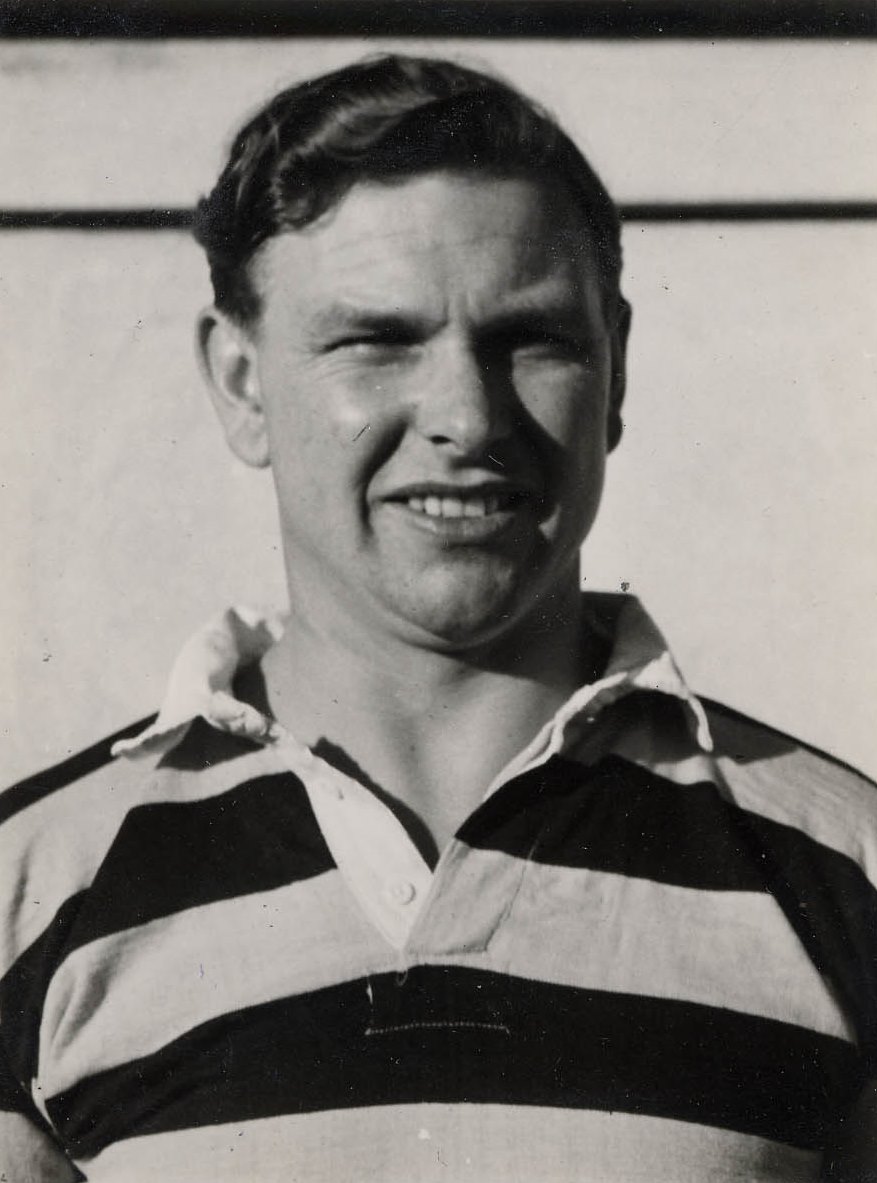 When he was called up he joined the RAF and only been in the Service for 3 weeks when he played against a New Zealand Combined Forces XV at Bedford on 2nd January 1943, the RAF won 25-19. He was able to play regularly for the Service until October of that year before he was sent to the USA to train as a fighter pilot in Arizona. His next game for the RAF was in the last fixture of the war against a South Wales XV at Swansea. He was listed in the programme for the RAF in the game against a Paris XV played at Parc de Princes on 11th November 1944, Armistice Day; this was the first major rugby game played in France following the invasion and was a watched by a capacity crowd of 20,000. In the event he was not available as he had been sent, unexpectedly, on a glider pilot's course. The result of this retraining meant that Fg Off Williams, as he now was, took part in 'Operation Varsity' the airborne assault across the River Rhine. Having landed his glider, he spent the next 6 days living in a slit trench wrapped in a parachute to keep himself warm. Still in Germany the day before he was scheduled to play for Great Britain against The Dominions, his Commanding Officer, Major Hugh Bartlett (who later captained Sussex at cricket), told him to pack his kit as he was being flown home for the game. Williams remarked at the time that he was amazed as the war was still in full spate, even though the end was in sight. He was taken by jeep to the Rhine, ferried across the river in an amphibious vehicle, before being driven to Eindhoven in another jeep. Transport Command then flew him to RAF Brize Norton, where another aircraft flew him to RAF Rivenhall in Essex. Absolutely exhausted he spent the night with his newly wedded wife before they both caught the train to Leicester, arriving in time for the pre-match lunch. Great Britain beat the Dominions 36-13 with Williams scoring 1 of the sides 9 tries. He also played in the last match to be organised by the war-time Inter-Services Rugby Committee, a British Empire XV v France and played at Richmond on 28th April 1945 before a capacity crowd of over 6,000. The French side contained 10 players who were later to be capped by their country, while their captain had been capped before the war. Almost all of the British Empire side were internationals and alongside Williams were 4 RAF colleagues. Bleddyn did not score in this match, but Owens, the RAF No 8, grabbed 2 tries and the Empire side ran out winners 27-6. The legendary Brigadier-General Jacques Chaban-Delmas, who had led the Resistance inside France during the war and played against the RAF in Paris, appeared on the wing. That is like the current DRR, Air Cdre Chris Moore, turning out in an Inter-Service game! Williams was a member of the RAF team that played in the first Inter-Service fixture after the war. The game at Twickenham on 16th February 1946 resulted in a 9-6 win for the RAF against the Army. That was to be his sole cap as he was demobilised before the game against the Army 5 weeks later. One of his younger brothers, Lloyd, played at scrum half in both Inter-Service games in '53, a draw 3-3 against the Royal Navy and a 11-3 defeat to the Army; Lloyd played 13 times for Wales between 1957 and 1962. Another younger brother, Cenydd, was in the last ever National Service intake and played in 4 Inter-Service games; in 1961 he was outside the great Alex Murphy playing at fly half, with the Gloucester scrum half Micky Booth as his half-back partner; the RAF lost to the Royal Navy 9-3, but beat the Army 19-11. In 1962 Cenydd moved to fly half as Murphy had left the Service, but Booth was still at scrum half and this was a Championship winning year after a win against the Royal Navy 16-6 and victory versus the Army 19-14. During the war Bleddyn was stationed at various units and while doing his basic aircrew training at RAF Heaton Park near Manchester, he played in a station side that included Richard Burton. He became a member of Cardiff RFC while serving at RAF St Athan, eventually playing 283 times and scoring 185 tries for the club, including a club record of 41 during the 1947-48 season. Each of Bleddyn's seven brothers also played for Cardiff and at one time four of the siblings played in the same team together and between them had a Cardiff career that spanned thirty years. He made his debut for Wales against England in 1947 and went on to play for his country a further 21 times; he captained his country on 5 occasions, winning every match. In 1953 he had the unique distinction of captaining his club and his country to victory against the touring All Blacks within the space of 4 days. When he was selected to tour with the 1950 British & Irish Lions, he became the 353rd person to be able to call himself a Lion. He had been injured towards the end of the season and the selectors insisted that he prove his fitness in a game arranged against Bath. A young Cliff Morgan hatched a plan to ensure that he was not overworked and would also make a break to 'gift' him a try. The plan worked and Williams made the trip although he was still struggling and needed every day of the six-week voyage to New Zealand (the total length of the last Lions tour) plus a couple of weeks' rehabilitation on arrival to complete his recovery. Despite having missed the 1st Test because of the injury, he went on to play in 20 of the 29 matches on tour, scoring 12 tries, including one in the 1st Test against Australia. He did however captain the Lions in the 3rd and 4th Tests against the All Blacks as Karl Mullen, the tour captain, was injured. 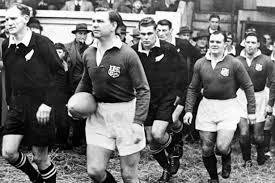 Bleddyn Williams leads out the Lions against the All Blacks, 1950.

In 1955 he was all set to tour with the Lions again this time in South Africa - when the inexplicable decision was made not to select players over the age of 30. It was to cost the Lions the services of Williams, their most experienced back, and rugby historians still debate what might have been had he been allowed to combine forces with Cliff Morgan, England's Jeff Butterfield and the emerging young Irish sensation Tony O'Reilly. Having not been selected for the Lions, he then made the decision to retire for rugby at the relatively early age of 32. In later life he was President of the Cardiff Athletic Club, the owners of Cardiff Arms Park and Sophia Gardens and was awarded the MBE in the 2005 New Year's Honours. He died at the Holme Tower Medical Centre in Cardiff on 6th July 2009 and in the many obituaries he was referred to as 'The Prince of Centres'.

About the Author - Having spent his entire working career in the Royal Air Force, David Smith is now the RAF Rugby Union's historian and, at best, a mediocre but enthusiastic rugby player. Other entries in the series - Flying Lions: Rory Underwood