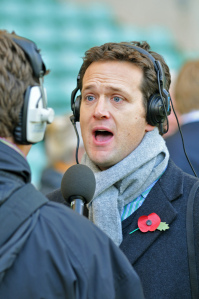 In 1938 an innovation that would, in time, have a profound bearing on the game of rugby, was trialled at Twickenham Stadium. The 52nd Calcutta Cup would be played out in front of cameras that would broadcast the game live on television.

Film recordings were not new, Pathe News had been making recordings since the 1920s. At full time they would can their film reels and transport them, by motorcycle, into town for editing and duplication. They would be shown in cinemas around the country the following week. Anyone who actually owned a television in 1938 was in for a rare treat. England went into the game knowing that a win would allow them to retain a share of the championship with Wales and Scotland. Scotland however knew that a win would give them the championship, Triple-Crown and Calcutta Cup. Six tries were registered in a game during which the impetus swung from one side to the other multiple times. With seconds left, and Scotland defending a slender lead, Robert Wilson Shaw scored one of the stadium's finest tries by running diagonally across the north-west corner of the try-line, sparking a Scottish pitch-invasion and securing the spoils for the visiting side. Scotland had won the first ever live-broadcast rugby match, but few English fans left the stadium disappointed at having witnessed such an enthralling contest. 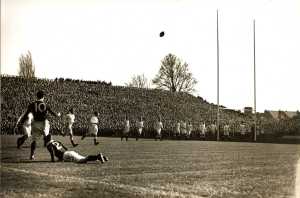 1938, however, turned out to be little more than a prelude, the events of the Second World War taking international rugby off the agenda for several years. But in 1952 the BBC met with representatives of the four home unions to discuss further broadcasts. The unions unanimously agreed to reject the proposal for fear that live broadcasting would damage club attendances. The following year the RFU canvassed the opinions of its members, fully expecting them to support their stance in the matter. To their surprise, their members overwhelmingly supported the BBC proposal. The RFU adjusted their position accordingly but it would be a further two years before the four unions couldcome to an agreement that facilitated live broadcasts. 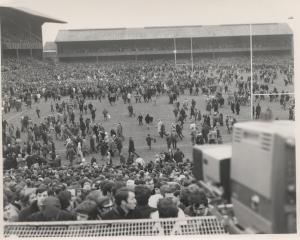 Once they had, a large wooden box, known as a 'boat', with a glass window, was bolted onto the front of the section of the West Stand that separated the upper and lower tiers, giving commentators a bird's eye view of the game. Over time commentator's voices have become even more recognisable than the players. Welshman and former Lions' captain Cliff Morgan was probably the first commentator to be taken to heart for his vocal craft, delivering the following memorable lines whilst watching the Barbarians score against New Zealand in 1973:

'If the greatest writer of the written word would've written that story no-one would have believed it'. 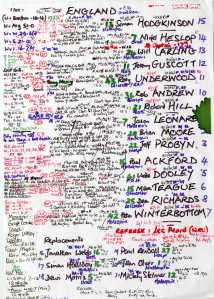 That same decade, rugby became forever entwined with the lilting affection of a PE teacher from the Scottish borders. Bill McLaren started out on the radio but progressed to television as the new medium grew in popularity. His preparation before matches was meticulous. For each game he produced extensive colour-coded notes, detailing every interesting statistic and vignette about both teams and all of the players. Throughout the 1970s, 1980s and 1990s his voice carried live television rugby broadcasting and he had come to be regarded as the 'Voice of Rugby' by the time he retired in 2000.

By this time television had worked its most profound impact on the culture of the game. The first two World Cups had exposed rugby to unprecedented levels of media exposure and in 1995, national unions found out to their alarm that they were in imminent danger of losing control of their sport. BskyB had approached and secured the support of many of rugby's most high profile players so the International Rugby Board called a special meeting in August and agreed the repeal of amateur regulations. Almost 100 years to the day since George Rowland Hill threatened to 'break the whole edifice' of rugby union, the sport had at last reneged on his commitments. After 1995, Rugby Union would operate on a professional basis. This meant more television coverage than ever by national and subscription broadcasters and latterly online. Rugby commentary and analysis has become a professional vocation in its own right, with many of Twickenham's former gladiators taking their turn behind the microphone. In 2000 the Office of Communications (Ofcom) declared that the 6-Nations was to be a Category B 'protected sporting event' meaning that the BBC's stable of reporters and commentators would continue to broadcast the tournament 'free-to-air'. And so Eddie Butler's rambling poetic musings, as well as his entertaining debates with agreeable side-kick Brian Moore, have remained a staple part of British test-rugby ever since.

About the Author - Phil McGowan has been a member of the World Rugby Museum team since 2007. This article and images are extracted his book Twickenham: Home of England Rugby.