A few years ago we ran a 5 part series called 'Rugby's Greatest Upsets', which included an article on the Wales v New Zealand match in Cardiff on 16th December 1905. Today we are sharing an eyewitness account of the same match, extracted from the 1948 book 'Rugby Recollections' by WJ Townsend Collins (aka 'Dromio'), who was a poet and correspondent from Newport. The All Blacks' Tour of 1905 had official sanction; the financial arrangements were considered to be such that the amateur status of the players would not be endangered; and the tour opened with two amazing victories-over Devonshire by 55 points to 4, over Cornwall by 41 points to nil. I saw their third game-against Bristol. They won again by 41 points to nil. These three victories proved that the All Blacks were a combination of uniquely-gifted players. 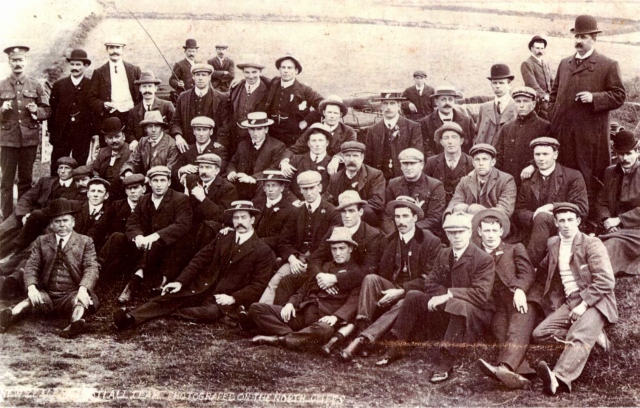 made a great burst and brought relief. To understand why to those who watched it this games stands out pre-eminently, it is necessary to recall what was at stake-the invincible record of a touring side who seemed then, and seem still, the most brilliant combination of Rugby Players who ever came from overseas to show what individual skill and combination could achieve; and it is necessary also to underline the fact that throughout the second half the New Zealanders were much more frequently in possession of the ball than Wales, therefore the attaching side. The last fifty minutes of the game were a long drawn out anxiety for the supporters of Wales, of desperate tension for New Zealand. Their frequent opportunities in attack were countered by aggressive defence. Rarely indeed was an All Black allowed room to move-the Welshmen dashed in upon their men and tackled wonderfully. There was great touch-finding by the Welsh backs; but all the time we felt that the home team were anvil, not hammer, and there came a moment when the New Zealanders got moving in a combined attack which seemed certain of reward. That supremely great player, W.J. Wallace ran cleverly and with determination, working towards the left, and passed to Deans, who made his never-to-be-forgotten burst. Big, speedy, strong, the thrust for the line was resolute and confident; but Deans was brought down almost at the spot where Teddy Morgan scored. There was a minute of almost agonised uncertainty, with Deans under two or three Welshmen. What really happened? Nobody knows. Spectators who were near the spot told different stories. Some said Deans put the ball down over the line-that he scored (that was his own claim till his dying day). Others said he was brought down outside but threw the ball forward. Anyhow, the referee, Mr. J. D. Dallas, the former Watsonian captain and Scottish forward, rules it was no try. That was New Zealand's last chance, for a kicking duel between G. Gillett (a fine forward who was also a good full back) and H. B. Winfield ended with the Cardiff man finding touch in the All Blacks' 25, and that ended their hope of saving the game. So they suffered the only defeat of their tour after a never-to-be-forgotten game. The 1905-6 All Blacks played 33 matches, won 32 and lost 1, with a score of 868 points to 47-a truly prodigious performance. They included three superlative players-W. J. Wallace, F. Roberts, and C. Seeling. Wallace was one of the greatest all-round players of the last sixty years-the best full-back, the cleverest threequarter, the greatest player the All Blacks had - superb in attack, pre-eminent in defence. As a runner he was not so dazzlingly brilliant as G. W. Smith (who, by the way, missed many games through injury); but he was elusive in a different way. Smith ran straight, and used the short swerve. Wallace used his speed in long sweeping swerves across the field (Ronald Poulton-Palmer often used the same technique). Wallace broke across the face of opponents almost at right angles, and straightening out, compelled the attention of the opponent who should have watched his co-centre, or his wing, and so made an opening. He did that at the critical moment in the match with Wales at Cardiff. As Wallace swerved to the left, R. G. Deans was outside him. "I'm with you!" cried Deans. "And I'm with you!" said Rhys Gabe, the Welsh centre. Wallace passed, and Deans (ignoring his wing, D. McGregor) made his burst for the corner. He was tackled (by Gabe, I think) almost on the line. As previously recorded, he declared on his death-bed that he scored; but the referee would not allow a try, and so the match goes down to history as the only defeat of this famous side. If G. W. Smith had been available at centre threequarter, and Wallace had played as full back, I think the All Blacks would have won, for it was the wonderful touch-finding of the Welsh full-back, H. B. Winfield, which turned the scale in favour of Wales, and Wallace would have avoided the mistake made by Gillett, who did a lot of kicking to the open, and so helped to wear down his own forwards while Winfield nursed the Welshmen by his long touch-finding. In Physical gifts, football skill, and perfection of judgment, W. J. Wallace lives in my memory as one of the dozen greatest players I have known, and if I were selecting a World Fifteen he would be my choice as full-back, for it was in that position he was greatest. In my World Team also I should find a place for the best forward of the 1905 All Blacks-Charles Seeling. How to describe him? Combine in one man the characteristics of the six forwards you have most admired-physique, fire, skill, endurance, judgment,--and you have Charles Seeling, second to none in the variety of his gifts. The third unforgettable player was F. Roberts, the half-back. Once more-think of the powers which go to the making of the ideal half: Roberts had them. Great-hearted, class to his finger-tips, he was one of the world's great players. In trying to appraise a man's merits, we have to take into account his opportunities and the company he keeps. A great player is greater in a great team; and Roberts, Wallace and Seeling owed something to the fact that they were supported in all their games by men who had knowledge of the game, speed, accuracy, and football skill. All these New Zealanders were a little better than the average English, Welsh, Irish or Scottish internationals of that period-perhaps of any period. Mark, I say the average. Every country has had many forwards and backs equal to the majority of the men who supported the superlative three ; but not often has any country (or any club) put in the field fifteen men all of whom were so gifted so versatile so resourceful. That much said let us add that in G. W. Smith, Bob Deans, D. McGregor, J. Hunter, W. Stead, and H. Mynott, they had brilliant backs ; and in F. Glasgow, W. Cunningham, A. McDonald, G. A. Tyler, and G. Nicholson, forwards of great strength, speed, skill and resolution. Their backing up was remarkable; they might have given more good passes, but they took lob passes and low passes and bad rising passes remarkably; and they were a wonderful scoring machine. The Welsh clubs proved that the machine could be jarred and jolted, for Newport were only beaten by six points to three, Cardiff by ten points to eight, and Swansea by four points to three; while the Welsh XV proved superior in the subtlety and precision of their attack.