by J. R. Suber The story as told to me goes like this: After a local rugby match in St. Louis, Missouri-perhaps around 1957-two of the players, both Irish, were having a disagreement in the locker room. They couldn't agree about who exactly scored a game-winning try in a famous match back in the United Kingdom. The referee overheard them and decided to interject. "It was Eric Bole," he assured them. They asked the referee how he knew. He replied, "I am Eric Bole." The Irishmen were surely surprised by such a coincidence! They may have wondered how this former rugby star had ended up in St. Louis of all places refereeing their rugby game! To readers today, the better question is probably, wait, who is Eric Bole? During the 1940s, Eric Bole was an English rugby player of outstanding ability-profiled in 1945 by The Times as "a forward of high promise"-and yet, he never managed to earn his international cap for England. It is a mystery that no doubt has helped obscure his otherwise impressive rugby career. As a schoolboy, Bole was a rugby star at Wycliffe College. At Cambridge University, he played all four years on the 1st XV, notably captaining the Light Blues to two victories in the Varsity Matches of 1945 and 1947, just the third Cambridge player to do so at the time. After the Second World War ended, he played in one Barbarians match and in all six of England's Victory International matches, the first against the so-called Khaki All Blacks. Post-university, Bole played for men's club Waterloo and helped Lancashire win three consecutive County Championships from 1947-49. In those days before professionalism, county rugby was the highest level of domestic competition; in the 1948 championship, it was Bole's try, in which he outran two defenders for fifty yards, that made the difference. 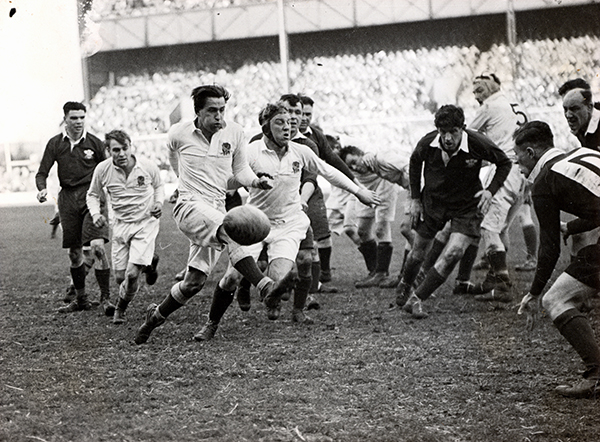 Eric Bole kicks the ball ahead against Wales during the Victory Internationals, February 23, 1946. Used with permission.

Throughout his career, Bole shared the pitch with numerous rugby greats. There was Fred "the Needle" Allen, who became a famous coach of the All Blacks. There was Haydn Tanner of Wales, considered a legendary scrum-half. There was Jackie Kyle, one of Ireland's best of all time. On the English side, he frequently lined up with England captain Jack Heaton, the speedy winger Dickie Guest, future RFU president Micky Steele-Bodger, and at least once with future Hall of Famer John Kendall-Carpenter. So then why was Bole never selected to play for England once international fixtures resumed in 1947? What's more, it appears he never even played in any of the Probables vs. Possibles selection trial matches either. Perhaps Bole was simply the victim of poor timing-the war disrupted the rugby careers of so many his age, and maybe he was past his prime by 1947. Yet, his playing for Lancashire makes it hard to argue he lacked the appropriate ability. Moreover, many of Bole's contemporaries did manage to earn their caps, so poor timing may not explain it, either. Perhaps the best answer is that Bole made a deliberate decision to focus his attentions elsewhere. After he graduated with his Master's degree from Cambridge in 1948, he began a career in teaching. His former teammate Micky Steele-Bodger told me that Bole caught the teaching bug. He himself later acknowledged that his teaching schedule conflicted with his availability to play rugby. If this is the explanation, then Bole apparently traded the roar of the stadium for the humble setting of the classroom. This path saw him emigrate to the United States in 1951 to work at a private Christian school in St. Louis, Missouri. He became a fixture there over the next two decades, influencing generations of students as a houseparent, coach, teacher, and headmaster. In 1988, Eric Bole passed away, just a few years before the United Kingdom would host the Rugby World Cup, which he had planned to attend. It has been through his many former students, though, that his legacy has lived on. Still today they tell stories about him-stories of his teaching moments, religious faith, mental discipline, and yes, his exploits on the rugby field, too. 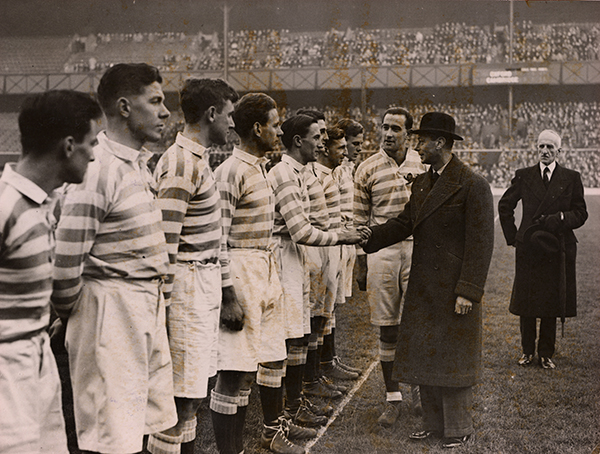