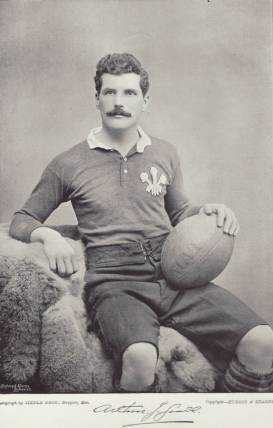 The following is an extract from 'One Among Many: the Story of Sunderland Rugby Football Club' by Keith Gregson.

The Gould Case was a cause-celebre in the days following the big split between union and league. The admirers of Arthur Gould, a popular Welsh rugby union international, presented him with a house. The RFU decreed that this was the equivalent of a 'monetary testimonial'. Although the Welsh Committee withdrew its £50 donation from the house fund, the RFU was still annoyed and banned its member clubs from playing any side for which Gould had been selected. They also refused to allow him to play for English clubs. The case went on for almost eighteen months at which point Gould decided to accept the testimonial. The rugby league and those who felt sympathy for Gould and the Welsh committee as the laws over testimonials in the welsh game were quite unclear the time.

In September 1897, the following private proposition was put forward for consideration by RFU members accepting that Gould's actions had been an 'act of professionalism', circumstances had been 'exceptional' and suggesting that he should be allowed to continue to play under the auspices of the RFU. The minutes of the Sunderland RFC committee and the governing show how complex and divisive this case was. In September 1897, the RFU proposal was read out to the Sunderland committee was written down as follows: "That Mr A J Gould having accepted a testimonial in the form that the Committee of the Rugby Union has decided to be an act of professionalism nevertheless under the exceptional circumstances of the case, the meeting recommends the Committee to allow him to play against clubs under their management" The club committee was much divided over its response to this RFU memo. At the club meeting where there was "a small attendance", it was resolved to send a representative to the national meeting to support the proposal. A week later a motion was put forward to rescind the last one and to inform Rowland Hill, Secretary of the RFU, the Athletics News and the Sunderland Post and Echo. This motion was defeated on the casting vote of the chairman. The originator of the amendment then proposed a special meeting to discuss the case further. This was defeated by eight votes to three. That wasn't the end of the matter. The wider club's governing board stepped in and said that the rugby club's original declaration of support for reinstating Gould was 'null and void' and that this too should be reported in the Athletics News, Yorkshire Post and the local papers.

According to the national histories similar heated debates took place everywhere. In August 1900, after almost three years of controversy, the Welsh laws on rugby professionalism were brought into line with the English ones and, as the RFU centenary history puts it, "so closed the great Gould case". How Sunderland RFC voted in the end is unclear.

About the Author - Keith Gregson is a Sunderland-based semi-retired freelancewriter, historian and musician. He has written numerous books about the history of sport including 'One Among Many', 'Sporting Ancestors' and 'Australia in Sunderland'. Details of his work can be found at keithgregson.com and his books can be purchased from Amazon.