Newport Rugby Football club is celebrating its 140th year with an exhibition at Newport Museum. Club historian Stephen Bennett here describes what visitors might expect. Newport RFC is one of the most famous rugby clubs in the world, with a rich history that few other clubs can match. Her first game was on 3rd April 1875 and she remained unbeaten for the next four seasons. More invincible seasons were to follow in 1891-92 and 1922-23. 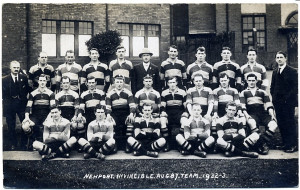 Newport has been Welsh champions 11 times and notable scalps include New Zealand, Australia and South Africa (twice). 150 of our players have been capped by Wales including 20 as captains. 31 British Lions and in 1910 provided seven payers and the captain to the tour of South Africa. Many famous players have worn the black & amber jersey including Arthur (Monkey) Gould, Harry Uzzell, Tommy Vile, Jack Wetter, Jack Morley, Ken Jones, and David Watkins amongst many other famous sons of this great club. 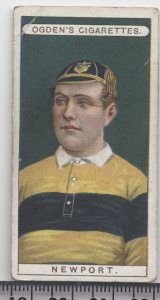 Just prior to the financial crash of 2008 extensive plans for the redevelopment of the famous Rodney Parade ground were announced. All stands were to be replaced, and the grounds of the old Newport Athletic club were to be sold off for student accommodation and a local community centre. 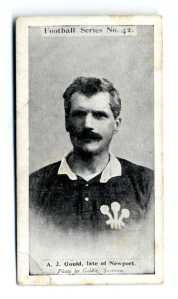 Included in the list of buildings to be demolished were the old offices which were built in 1911. A small group of supporters decided that before the bulldozers were to move in everywhere had to be searched. But before this could take place the recession set in and the plans for redevelopment were scrapped. Even though the site was reprieved it took nearly five years before the search took place. In April 2013 the attics above the old offices were finally opened, and to our complete astonishment a vast hoard of material was discovered from the earliest years of the club, from 1872 until 1914. Every conceivable item of memorabilia was there - posters, tickets, programmes, club minute books, documents, letters, financial records, photographs, scrapbooks and hundreds of postcards from pre 1914 mostly depicting rugby teams, games and players. As well as rugby there was an incredible collection of memorabilia from the Welsh Lawn Tennis championships which started in 1897 and continued until the early 1970's. Athletics, gymnastics, cricket and hockey are similarly represented in the collection. 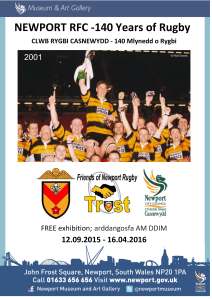 After two years a Heritage group is now in place and applying for funding from Heritage Lottery Fund and CYMEL the Welsh equivalent to preserve, restore and display this collection for future generations. Many of these items are currently on display at Newport Museum and Art Gallery as part of their '140 Years of Rugby' exhibition that runs until April 2016.