As rugby seasons around the northern hemisphere swing back into action we take a look at three retired trophies that reside in the World Rugby Museum collection. 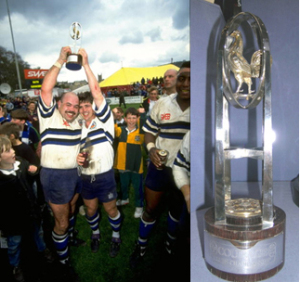 The first club league trophy to be awarded to a top-tier English club was the Courage League Trophy, in 1987. Courage Breweries were the first sponsors of the leagues, consisting of over 1000 clubs in 108 leagues. Courage Brewery was started by Aberdonian John Courage in 1787 in a brewhouse next to Tower Bridge. The company, now owned by Wells and Young, are known for their cockerel logo as can be seen top centre in the trophy. 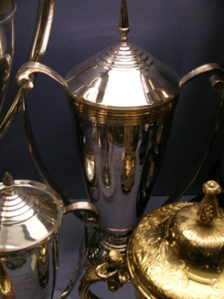 The dawn of professionalism saw corporate interest in the sport grow and, in 1997, Courage were replaced by Allied Dunbar as sponsor and a new trophy was introduced as the league became known as the Premiership. 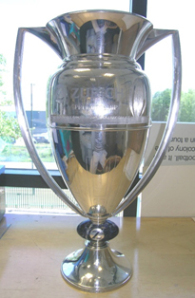 Then, in 2000, a third trophy was produced as the competition became the Zurich Premiership. The trophy was replaced in 2005 by a fourth trophy, called the Guinness Premiership (until 2010) and the Aviva Premiership (since 2011). At the height of the amateur era league competitions were discouraged - it was feared that they may promote professionalism. When the Calcutta Cup was first offered to the RFU in 1878 it was initially proposed for a knockout competition, like the FA cup in football, however this was rejected and a counter proposal to use the trophy for the international match (at the time only England and Scotland were playing) was made. It was not until more than a century later, in 1987, that the first club league competition was introduced.