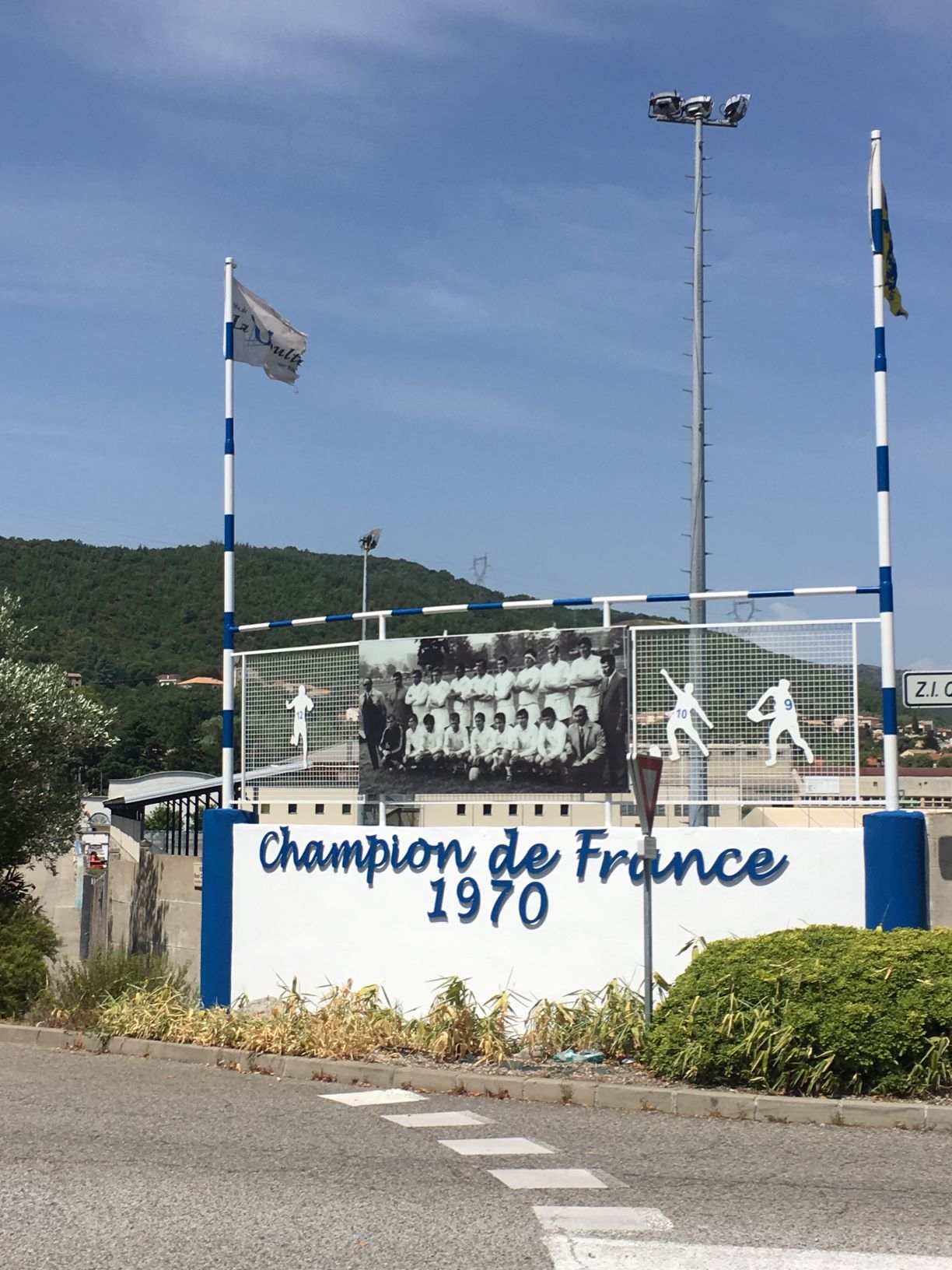 La Voulte-sur-Rhone is a small town of 5,000 inhabitants with a proud rugby heritage situated in the Ardeche department in the south east of France. For one magical season in 1969-70, La Voulte was the champion club of France and winners of the much coveted 'Bouclier de Brennus' by defeating Montferrand in the Stade Municipal in Toulouse. It is still one of only two clubs with fewer than 10,000 citizens to win this illustrious trophy.

La Voulte boasted the architects of the first French Grand Slam in 1968, the Camberabero brothers Guy and Lilian at half back, the Romanian international full back Mihai Wusek and two internationals in their pack, the prop Jean-Claude Noble and the second row forward Michel Savitsky, but they were not one of the fancied club sides at the beginning of the season.

Sixty four teams started the tournament and La Voulte qualified from their pool to join the last thirty two. They beat Bayonne by 9 points to 3 and then progressed to the quarter-finals by beating Graulhet by 24-3. In the quarter-final they faced Brive who had knocked out the young and highly fancied Beziers side in the previous round. It was a notable scalp for Brive as Beziers would go on to win four 'Bouclier de Brennus' titles over the next five years.

La Voulte were the definite underdogs on neutral territory at the Stade Marcel Michelin in Clermont-Ferrand, but they overcame Brive by 18 points to 8 due to a consummate performance by the Camberabero brothers. Lilian scored a try from the base of the scrum midway through the first half and their captain Guy kicked twelve points with three drop goals and a penalty goal. A late unconverted try in the 78th minute by wing forward Paul Digonnet sealed their victory.

In the semi-final at the Stade Municipal in Bordeaux on May 3rd 1970, La Voulte now faced an Agen team with six internationals in its pack. Despite an injury to Savitsky in the eighteenth minute which saw La Voulte reduced to seven forwards for the rest of the match, the boot of fly half Guy Camberabero was again decisive with two drop goals and a penalty giving the club an unexpected victory over their more fancied opponents by 9 points to 3. They had now reached what would be their first and only French club final.

The venue for the final was the Stade Municipal in Toulouse. In front of a crowd of 35,000 spectators, their opponents were Montferrand, the club side from Clermont-Ferrand and victors over Pau (Section Paloise) in the quarter-final and Grenoble in the semi-final. It was Montferrand's first appearance in the Final since 1937 and they had lost both of their previous finals. For the first time since 1954, there was no club in the final from the South West of France.

There was just one score in a taut and tightly contested match on a grey rainy day. In the ninth minute, the La Voulte centre Renaud Vialar scored a try in the corner after Guy Camberabero had charged down a Montferrand kick, Digonnet had kicked the ball on towards the try line and the Montferrand full back had failed to clear the danger. Guy missed the conversion and all the other opportunities he had to increase the La Voulte lead including a last-minute drop goal attempt that hit the post. Montferrand fared no better with their kicking and twice were held up near the La Voulte line when a score which would have won the game seemed inevitable. In the 24th minute their winger Jean-Jacques Desvernois dropped the ball with a clear run to the try line and in the 78th minute their second row forward Robert Boisson was denied by a forward pass.

When the final whistle went, the supporters from la Voulte were ecstatic and the memories of that day and the subsequent victory parade fifty years ago are still recalled fondly in the town as evinced by pictures of the victorious team on the roundabout by the stadium. The Camberabero family further enhanced their status in French rugby a generation later when Guy's son Didier played 32 matches for France between 1982 and 2003 including the first Rugby World Cup Final in 1987.

While their opponents in 1970 such as Agen, Brive, Grenoble, Montferrand and Pau were able to retain their position in the rugby elite in the professional era with varying degrees of success, many regional clubs such as La Voulte struggled after 1995. Despite two attempts to merge with other clubs such as Valence in 2010 and Romans in 2016, La Voulte has ceased to exist as an independent club in the professional era, but the town is left with the memory of a unique triumph and a special place in French rugby history.