Like Great Grandfather, Like Son... The Museum was recently contacted by Paul Whitehead, the great-grandson of Devon and England stalwart Samuel George Williams.

Williams, a contemporary of Jimmy Peters, played club rugby for Devonport Albion at the beginning of the 20th century. He won his 7 England caps as a forward between 1902 and 1907, scoring 2 tries in the process. 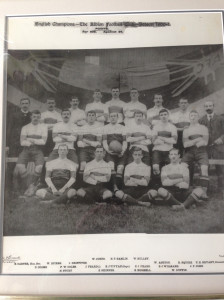 Paul's mother Mary found a picture of Devonport's 1901 squad whilst clearing out the loft, thus giving Paul the opportunity of actually seeing a picture of his relative for the first time. Knowing that Samuel's Albion, Devon and England caps were displayed at Plymouth's Brickfield ground, Paul got in touch and was invited into the club to tell the story.

Paul then contacted the Museum and we were able to share some of our information and archival photographs with him. The delightful irony of the story is that Paul and Sarah named their 22 month old son Samuel, before they were aware that this was also the name of his talented forefather! Footnote: Paul's photograph proudly proclaims that Devonport Albion, were champions of England in 1900/01. While Devonport were undoubtedly a fine team - winning 38 out of 39 fixtures, there was actually no national club competition in English rugby union at the time. Leagues, and even cup competitions, smacked too much of professionalism and ungentlemanly competitiveness for the game's conservative administrators. The reference to a being champions of England may, howecver, hint at the struggle that was going on at the time between the union game and the newly-established Northern Union (rugby league) code. The league game appealed to the south-west because of strong working class participation, and for a while made good progress in the region. Many local players signed for northern clubs and Devonport's neighbours, Plymouth RFC, were disbanded and their ground taken over by a league side. The effort to establish rugby league in the region was ultimately rebuffed and after World War One Plymouth RFC and Devonport Albion merged to form Plymouth Albion.