125 years ago on the 9th April 1890, in the early hours of the morning, W P Carpmael and the Southern Nomads team sat down after a successful Easter tour and a hearty meal to form a touring rugby side. The team was to 'play the game without inhibition, enjoy rugby in the remoter regions and to share the good company of rugby men everywhere' - edicts that are still alive in the club today. 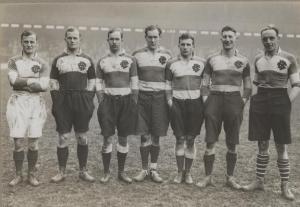 Carpmael and his 15 had just finished their last game of a 4 match tour and were staying in the Alexandra Hotel, Bradford. After dining at the Leuchter's Restaurant and enjoying the local ale the club made their way back to the hotel and '…about the witching hour of the night, the whole idea took definite shape, and it was at once carried out by the whole party enthusiastically electing themselves and each other original members of the nascent organization.' - The Sportsman 9th April 1890. Club rules were decided upon in an October meeting, the now famous black and white hooped jerseys selected, and the first Barbarians tour organised. The tour saw them travel to the North of England for the first match on the 27th December 1890. A contemporaneous diary by an anonymous club member relates the story of their first match against Hartlepool. Melton Mowbray pies and ale were the pre-match snacks of choice and they seemed to work as the Baa Baa's had a comfortable win of 9 points to 4.

Jersey belonging to G V Evers (1899 British Lions and Barbarians) who played for the Barbarians in the 1902/1903 season.

Over the course of the team's history the Barbarians have become famous for their attacking style of play leading to some spectacular match moments like the 'greatest try ever scored' by Gareth Edwards in the 1973 match against New Zealand. The invitation only side has hosted international greats such as William Wavell Wakefield, Andy Irvine, Gerald Davies and Jason Robinson to name only a few and it continues to play international teams on an annual basis.