11 November 2015
A History of the Bristol Memorial Ground

The Memorial Ground was built for the Bristol Rugby Club, and is now the home of Bristol Rovers Football Club. Next year, the city's Ceremony of Remembrance is to be held at the war memorial stadium. Might the rugby community adopt the Memorial Ground as the national rugby war memorial? Here Jamie Carstairs makes his case for a unique sporting venue. 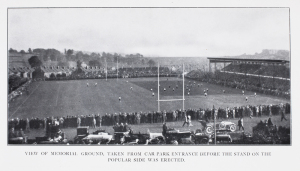 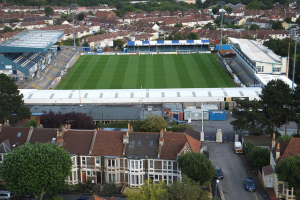 The Memorial Ground was built in 1921 for Bristol Rugby Club, as a living tribute to three hundred local rugby men who were killed in the First World War. The stadium was entrusted for sport or recreation in perpetuity. The Memorial Ground is Bristol's largest war memorial, and every time it is used for sport it evokes remembrance of those who died. Privately owned since 1998, the Memorial Stadium is used by Bristol Rovers Football Club, whilst Bristol Rugby Club now play at the Ashton Gate Stadium. In the Edwardian era, rugby was hugely popular among Bristolians. When the Great War broke out, large numbers of rugby players enlisted - 'The Greater Game' overruling all other considerations. The interplay of sporting values and the good spirits of servicemen in the First World War is well documented. Rugby players were celebrity role models, their fair play, as well as their comradeship, discipline, physical fitness and patriotism, were valued and well respected. The Great War was a traumatic catastrophe for the people of Europe. 'Communities of the bereaved' responded with a wave of memorialisation. In Britain, the notion of 'our debt to sport' was widely understood. Bristol's immediate idea for the city's first substantial war memorial was heartfelt, insightful and practical - long term good would come of bad. 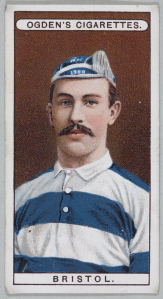 It was determined that an already mooted new rugby ground would be a permanent memorial to "perpetuate the memory of 300 local rugby footballers who made the great sacrifice". In March 1920, a public appeal was launched, and the people of Bristol swiftly donated several thousand pounds to pay for the construction works and to equip the ground. A suitable site known as Buffalo Bill's Field, had been acquired by the builder and great friend of rugby, Frank Cowlin, and he now generously donated the land. The Memorial Ground was designed by local architect James Hart, who had been for many years a member of the club's committee. The entrance gates were presented by a former Bristol Football Club player John S. Edbrooke, and the plaques were inscribed by A.G. Bird, another Bristol rugby player. The Memorial Ground was formally opened on 24 September 1921 by Bristol's Lord Mayor, George Bryant Britton. The opening featured a thrilling game versus Cardiff, before a full stadium. Equally matched for much of it, towards the end, the game took off with four tries and two conversions for the Bristol team, in rapid succession, likened to "an explosive bursting its shell".

Rededicated after the Second World War, annual Remembrance Day services are still held at the Ground, and two minutes' silence is observed before the game nearest to Armistice Day. The Mem became the 'soul' of Bristol rugby. Small acts of remembrance occur every time the Memorial Stadium is mentioned by name, in the media, or in conversation. Nearly every day is a day of remembrance, not just Remembrance Sunday. At every match, supporters pass the entrance gates and see the inscriptions. This is a dynamic war memorial, a place of vigorous sport and the roar of spectator passion. It is not an ordinary static, formal and sombre memorial. The hopes, strategies and vicissitudes of sport reflect those of life and remind us of the randomness of untimely death. The fallen sportsmen live on in this place. Because this war memorial is a sports ground - a place of heightened passions and expressed emotions - the poignancy of the memorialisation is intensified. Few war memorials have this effective, frequent, ever renewing, and profound impact on the imagination, generation after generation. About the Author - Jamie Carstairs is a photographer, interested in history, place and community. He works at the University of Bristol, and manages the Historical Photographs of China project. More information at The Memorial Ground Bristol Wordpress site: