In reaching the 2015 World Cup final, Australia will have competed in four of the first eight Rugby World Cup Finals. We have been looking back over some of the objects we have in our collection that help to tell a little of their history in the game. Rugby was introduced to Australia in 1864 at Sydney University. The national team, now known as the 'Wallabies', started out life as New South Wales and Queensland wearing light blue and maroon respectively however, in 1928 a decision was made to adopt the Australian amateur colours of green and gold. 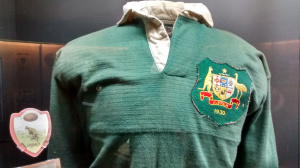 Australia won with 6 points to 5 and Roger Spong, half-back for the Lions and England, swapped his jersey for this one to keep as a souvenir. The jersey has been with the museum on loan since 2004, courtesy of Simon Spong, Roger's grandson. The bright gold jersey Australia are now know for first appeared in 1961 when the team toured South Africa. Gold was chosen to avoid any confusion with the green of the Springboks and the change seems to have stuck! The jersey is currently on display in the World Rugby Room at the World Rugby Museum.