It's doubtful if any of those in the party from Guy's Hospital Rugby Club, enjoying a drink before heading off to the 2001 Lions match in Melbourne, realised that they were only a metaphorical stone's throw from the venue where Alexander (Alec) William Pearson played his last rugby match, at the Melbourne Cricket Ground (MCG). Or, even if they did, that one of his England caps was stored away there, deep down in the vaults of the Melbourne Cricket Club Museum. Those 21st century representatives of the world's oldest football club, founded in 1843, were soon to board trams and taxis and be spirited westward to what was then called the Colonial Stadium in docklands, the venue almost exactly one year earlier of the first ever Rugby Test match (Australia v South Africa) to be played under a closed roof. Meanwhile, back in the darkness of the Melbourne Cricket Club Museum vaults, the much faded England cap bore the numbers 1875-6-7-8 to indicate the years during which Alec was selected to play for England. He would have had those years embroidered on his cap to reflect each of his seven appearances, a practice which some players started back in the 1870s and which continued until after the Second World War. But on that evening back in 2001 Alec's selection as an England player would have been far from the thoughts of the Guy's Hospital party, even those who might have known that during his time as an international he was also playing for Blackheath and for their Club.

His journey on the road to fame as the first Australian born international began at Mt. Ridley, near Craigieburn, north of Melbourne in Victoria, on 30 September 1853. In 1858 his family left for England to obtain an education for him and his older brother James and they were both to be enrolled at the Blackheath Proprietary School in Greenwich, London. Both Pearson boys were to play rugby for the Blackheath Proprietary School and Club, quite often in the same team. By the age of nineteen Alec had become noted for his hard tackling and long drop kicks and his first call to play at an 'elite' level was for the South in the second of the annual North v South matches. 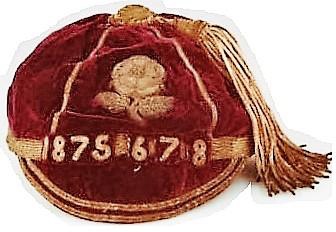 After his first experience of North v South, and presumably several Trial games, Alec made his first appearance in a Test. The match at the Kennington Oval was the first occasion in which Ireland featured in the international rugby calendar and were clad in a green and white striped jersey with a shamrock at the breast. England meanwhile were complete in white jersey with red rose, white knickerbockers, dark brown stockings and rose coloured cap. In this first international for Alec, who had been picked for his hard tackling and kicking, he amply justified his selection by making the one successful converting kick. Not unexpectedly England won, this time by 1 goal, one drop goal and one try to nil.

England's next match was held at Raeburn Place, Edinburgh, under sunny blue skies and with a pitch in perfect order. On this particular Monday (almost all these early Test matches were, for some obscure reason, held on a Monday) Scotland, having won the toss, took advantage of kicking off with the stiff breeze at their backs, a breeze which had mainly expired by half time. Play was mostly in the forwards and was reckoned to be one of the fastest international matches seen to date. Alec was commended for his sure tackling and strong kicking although in the prevailing conditions he just failed with a 30 yard place kick and at a later stage was tackled after a good run to within ten yards of the line. This was just before 'no side' was called and the match ended as a nil all draw.

At the Leinster Cricket Ground in Dublin, the first rugby test match to be held on Irish soil, it was soil over which a hard frost had recently prevailed but fortunately on the previous day a thaw had set in. The Irish this time turned out in navy blue knickerbockers and stockings but inexplicably wore white jerseys, only distinguishable from the English by a shamrock emblem rather than a rose. At least they wore green velvet caps while the English retained their rose coloured headgear. It was a finely contested match, in which Alec was commended for his dropping, tackling and general back play and his place kicking as 'a triumph.' A quarter of an hour before the end he '...kicked a magnificent goal, amidst a volley of cheering.' England won by that 1 Goal and I try to nil.

Beneath a sunny sky and on to the firm turf of the Oval the two teams emerged before a record crowd of some two thousand on 6 March 1876. A pre match photo of the England team included Pearson who had come in as a late replacement in this, the last test match featuring twenty players on each side. Although at the start they had the breeze at their backs it was soon evident that the Scots faced a generally superior side and not long after the lemons had been taken at the five minute half time break F H Lee (Oxford University; Forward) ran in behind the posts to score a try to the great cheers of the spectators. L. Stokes (Blackheath; Three Quarter) then kicked the Goal and while the Scots never gave up they lost by 1 Goal 1 Try to Nil

Having missed out on the Ireland Test in February Alec was no doubt pleased to receive the letter informing him of his selection to play in the England team against Scotland at Raeburn Place in Edinburgh and he was probably diligent in responding 'at once ' to the RFU Secretary, H.J.Graham, of his acceptance. This was the first test he played under the new system of fifteen a side and while Alec returned to share with Louis H. Birkett as one of the two Backs, it was not long before such pairings were to be transformed into what has now long since been accepted as the single Full Back position. With more space to cover but more room to move the Scotsmen constantly pressed deep into the England half with forward rushes and some good displays of the now lost art of dribbling. It was during one of those spells near the end when, with England forced back onto their twenty-five, that the ball went to the Scotland three quarter M.Cross who then kicked a brilliant drop goal. That was to be the sole score for the day and to give the win to Scotland by 1 drop Goal to Nil

It was back to the Kennington Oval, again on a Monday, where the weather was gloriously fine and, despite having to pay an increased entry fee of two shillings, some 3,000 spectators had gathered. England were turned out in their usual whites with brown stockings and Scotland with blue jerseys, stockings and caps with white knickerbockers. Scotland won the toss and elected to play towards the famous gasworks, thus putting the wind and dazzling sun in the faces of their opponents. Plenty of scrummages saw the ball well contested in both halves but mainly in England's and a number of near miss try's and kicks by both sides had the game remaining scoreless by halftime. It was much the same in the second half and while one report stated that never before had England forwards come off so second best and, had it not been for the good runs of Evanson, the judgement and knowledge of Stokes, the good tackling of Hornby and the safe back play of Pearson, it would have gone hard for England. As it was the game resulted in a Nil all draw.

Only a week later and England took the field at Lansdowne Road with only four of the same players (including Alec) and four new caps. Evidently the game started very late, primarily because of the taking of team photos. The new England captain, M.W Marshall, decided to play with the strong wind in the first half and by so doing achieved victory. Alec contributed to the try scored by H.P.Gardiner and then duly converted that into a goal. Before half time he had converted another try into a goal but failed to convert another and the score remained unchanged. Right near the end of the match 'Pearson made a fine run but the Umpire ruled that he had been in touch and while the ball was being returned 'no side' was called with a win for England of 2 Goals and 1 try to Nil. Alec returned to Victoria in 1880 and in 1881, the year of only a second royal visit to Australia , he was to play his last game of rugby at the age of twenty-seven. Some one hundred years later a daughter, Lola Maude Pearson, was to donate his England cap to the antecedent of the present Australian National Sports Museum in Melbourne.